Search for a country or city… 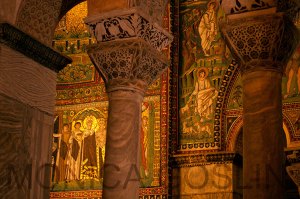 Travel tips and What to See in Ravenna, Italy

Ravenna, Italy is a beautiful city with a deep history. If planning a trip to Ravenna, Italy I suggest that you allow at least two full days as there is a lot to see.  You will find lovely streets, a bustling old city center with restaurants and shops, and of course all the main sights to see.

Below I will highlight the main sights, although descriptions do not do these buildings, artwork, and mosaics justice; you have to see them in person! Or you can see my photographs of Ravenna, Italy the Monica Goslin Photography Website via photoshelter (each site below also links to the appropriate image).

And a quick tip before we get started – watch for the bike riders! Ravenna is a city of bikes so make sure you watch for them when walking around!

What to see in Ravenna, Italy:

1 – Basilica of San Vitale – This should be your first stop because it is one of the main sights and it will take you a while to see since you will spend a while gawking at the interior of this Basilica!

The church was built from 527 to 548, and started by Bishop Ecclesius. It is reported that the construction was sponsored by a Greek banker who also sponsored the Basiclica of Sant’Apollinare in Classe (discussed later on and another must see sight!).

The Basilica of San Vitale has an octagonal shape and is famous for the Byzantine mosaics which are some of the largest and best preserved. This is one of the most important examples of Christian Byzantine art and architecture. The mosaics are stunning, so detailed, and it is truly remarkable that they have survived. There are biblical scenes and I recommend having a guide book with you that describes the mosaics in full so you can fully appreciate them.

Two mosaic panels of note are at the foot of the apse. One panel depicts the East Roman Emperor Justinian I standing with court officials, guards, and deacons. The other panel depicts Empress Theodora and her court ladies. These panels were made in 548!

2 – Mausoleum of Galla Placidia – This small brick building is next to the Basilica of San Vitale and holds another set of incredible mosaics. The building houses three sarcophagi: Galla Placidia, the daughter of the Roman Emperor Theodosius I, her brother the Emperor Valentinian II, and her husband, the Emperor Constantius III. The mosaics are again very detailed with scenes of apostles and saints.

3 –Baptistry of Neon – This brick building was erected in the 4th and 5th century. The Baptistry also has an octagonal shape with four niches and a dome covered in mosaics that depicts the baptism of Jesus by Saint John the Baptist with the apostles circling the scene. The Baptistry is next to the Cathedral of Ravenna, which is lovely if you have time to pop in to see it.

4 – Basilica of Sant’Apollinare Nuovo –  This Basilica  has passed through many hands and changed names numerous times. The Basilica was built by the Ostrogoth King Theodoric, who used it as his palace chapel during the 6th century. In 561 the Basilica was under the rule of the Byzantine emperor, Justinian I. There is a legend that Pope Gregory the Great had the mosaics blackened, claiming that the golden colors distracted worshippers. In 856 the Basilica was renamed again, holding the name it has today. The mosaics along the walls have been renovated, especially after World War One when they sustained some damage.

What are you looking at… Well there are different rows of mosaics along the walls. At the top, there are 13 scenes depicting Jesus’ miracles on the left side and 13 scenes depicting the Passion and Resurrection on the right side. The next row shows saints and prophets; sixteen on each side (between the windows) and you can see the Hellenistic-Roman tradition of each figure having a unique expression. And the bottom row is in the Byzantine style. The bottom left row is a procession of 22 Virgins, led by the Three Magi who are moving towards the Madonna and Child. The right bottom row is another procession of 26 Martyrs who are led by Saint Martin and moving towards a group representing Christ who is surrounded by four angels.

5 – Dante’s Tomb – Not far from the Basilica of Sant’Appolinare Nuovo, you can stop by Dante’s Tomb and pay your respects to the Italian poet responsible for you having to read the Divine Comedy in high school.

6 – Bishops Palace and the Archbishop’s Chapel – If you have time, visit the Bishops Palace which serves as a museum. On the first floor (meaning second floor) you will see the Archbishop’s Chapel with mosaics dating from the 6th century. The chapel is dedicated to Saint Andrew, although it was originally dedicated to the Savior representing Christ as a general treading on the beasts. It is said this is the only Early Christian private oratory to have survived to the present day.

7 – Basilica of Sant’Apollinare in Classe – This Basilica is just on the outskirts of the city and can be reached by car (although directions are a bit confusing, so if you can get a taxi that would be easier). The Basilica is dedicated to Saint Apollinaris, the first bishop of Ravenna and dates back to the 6th century! The surviving mosaics at the apse are stunning. Above the apse there are the four Evangelists and Christ, with lambs beneath them (twelve to symbolize the Twelve Apostles). The arch has a scene of a pasture with Saint Apollinaris in the center. Between the windows of the apse are the four bishops who founded the main basilicas in Ravenna. The faded mosaics along the walls are of some of the archbishops of Ravenna. So while it is a bit out of the way, it is worth it to see this Basilica!

Hope this was helpful and enjoy your visit to Ravenna, Italy!

How to Get to Ravenna, Italy:

When to go visit Ravenna, Italy:

– Weather is mild in the region and evens summers are not too bad since there is a breeze as the city is not far from the Adriatic Sea. (However there are little bugs that bite, not mosquitoes, but bring bug spray if you visit in the summer).